Cyberbullying: It's Time to Prioritize an Ever-Growing Issue

Today's increasingly technology-based communication style and social media platforms have exposed the details of people's lives, both intentionally and unintentionally. When these details are so readily available, people can create or misuse information to publicly and negatively impact the lives of others by cyberbullying, which experts refer to as the use of technology to repeatedly and intentionally harass, hurt, embarrass, or intimidate another person online. 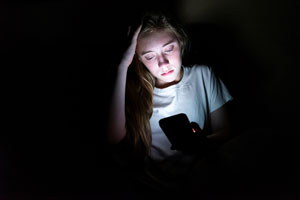 These numbers are saying something: Cyberbullying is a widespread issue and it happens in many forms. For example, online harassment via name-calling and rumor-spreading are most common in teen boys and girls. Experts say harassment often targets an individual's grades, intelligence, race, and sexuality. They have also found that those targeted are more likely to experience depression, avoid social situations due to fear of being judged negatively, and tend to see themselves in a more negative and critical way.

These negative long-term effects of online bullying make preventing attacks a priority – but where to start? Cyberbullying Research Center experts suggest several tips on how to decrease attacks. The first tip is advice on passwords. In addition to keeping them where others can't see, the experts also suggested not to share them, even with the closest of friends. Next comes advice on images. Before posting or sending an image, consider if it is an appropriate post for a parent, grandparent, coworker, and the rest of the world to see. If not, don't post it. Lastly, set up privacy controls. Most social media platforms have this option in their app settings. Restrict access to online profiles to trusted friends only and do not accept friend requests from strangers or unfamiliar profiles.

In addition to efforts to decrease cyberbullying, experts added that it is as important to support those who've experienced it by responding to the act appropriately and in a timely manner. Researchers say that individuals who witness cyberbullying should take these action steps: provide encouragement to the targeted individual and help block the bully, save digital evidence, and reach out to an adult. North Dakota cyberbullying laws indicate harassment on or off campus can be reported to school authorities. Even more important, experts suggested, is for witnesses to never contribute to the behavior by forwarding hurtful messages, laughing at inappropriate jokes or content, condoning the act just to "fit in", or otherwise silently allowing it to continue.

As well as tips for those who are bullied, experts also suggested tips for parents who learn their child is a cyberbully. Acknowledging that surprise may be a parent's first reaction, they should know their number one goal is to stop the bullying, regardless of who started it. Experts also suggested that parents' conversations be respectful and caring, with a focus on the behavior. An additional tip is to provide the reminder that although some social media comments might seem harmless to some, they can be a sore sport or even harmful to others and are best avoided.

Standing up against cyberbullying, or any form of harassment for that matter, can be intimidating, but its importance cannot be overemphasized. Although plenty of tips have been provided by expert researchers, it is up to North Dakota community members to follow through and implement them. Using even just a few of the provided tips can dampen cyberbullying's negative effects and help to keep online communication and social media platforms safer and more enjoyable.

This article also appeared in the December 29, 2022 issue of the The Jamestown Sun.

Morgan Thomas is a third-year medical student at the University of North Dakota School of Medicine & Health Sciences. She was selected as the Jamestown participant for the school's ROME program, or Rural Opportunities in Medical Education. Because the program includes teaching student doctors about the importance of how rural newspapers can deliver health information, she has written this column for her ROME community. The information is not for diagnosis or treatment and should not be used in place of previous medical advice provided by a licensed practitioner.