Farming Has Five Times More Injuries Than All Professions 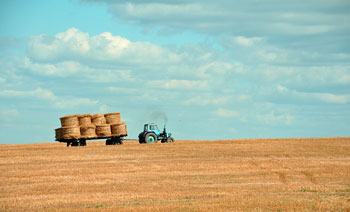 Big Stone County, Minnesota, has 400 farms that cover 80% of the land in the county, despite having only 5,200 residents. While farming's impact on the area should come as a shock to no one, you may be surprised by how dangerous the profession is. In fact, farming is among the most dangerous of professions. It has a death rate 5 times higher than that of all other professions combined. Meaning a farmer is 5 times more likely to die due to a workplace accident than the average person. This increased risk of death is accompanied by an injury rate that is getting worse. One study saw the injury rate triple from 2005 to 2013. Why are injuries becoming more and more common? One cause is the fact that the average age of farmers is getting older. The average farm principal operator in Big Stone County is 55 years old, and farmers who are 55 years old and older have a death rate that is more than double the death rate of farming in general. This study also found the longer you are around a machine, the more likely that you will get hurt by it. Farmers today need to spend more and more time on tractors and machinery because farms are getting larger due to consolidation.

The traumatic nature of many farm injuries is a major factor in why farmers have such a high death rate. Fifty percent of deaths on farms are due to machinery or vehicles with tipped tractors being by far the most common cause of a death. Some other common causes of death include grain entrapment and being killed by livestock. Traumatic injuries require emergent medical attention, something that can take a significant amount of time to get in rural areas. Tipping over a tractor outside of Ortonville isn't the same as a getting into a car accident in Minneapolis. That tipped tractor could injure a farmer out who was working alone in a field that is 30 minutes away from a car that is another 30 minutes away from the nearest hospital that is another full hour away from the nearest surgeon. Calling 911 can get medical care to an injured farmer faster than they can drive themselves to the hospital, but there is still a significant amount of time that will pass between the injury and the injured getting the help they need.

Not every farm injury is a matter of life and death. Other injuries carry the risk of a loss of productivity while recovering. In the U.S., there are over 150 injuries every day that are significant enough that they cause farmers to miss work. Over the course of a year this translates to 5 out of every 100 farmers having an injury this bad. With Big Stone County's 400 farms and at least 400 farmers, there is a chance that 20 of your friends and neighbors are going to miss time working on the farm this year because of an injury.

There is a significant financial impact associated with farm injuries. A 1992 study found that farm injuries carried a cost of $4.57 billion in the U.S. at that time, and a recent report noted a $21-31 million impact on Minnesota's economy alone. That study found that lost productivity on the farm had a larger financial impact than the direct medical costs of the injury. This means an injury can be the difference between a profitable year and taking a loss.

Farming is a dangerous profession with a significant risk for injury and death. The death rate has stayed the same for decades and the injury rate is getting worse. Something can be said for not getting worse, but this is a time in medicine where death rates for so many diseases – breast cancer, HIV, heart disease – are getting better. Many of these injuries and deaths can be prevented with proper safety practices. The injuries I saw while in Ortonville all had a similar story. Late, heavy snowfall this spring led to a late start to the planting season, creating a stressful time crunch that caused people to rush their work and cut corners with safety. I'd like to remind the community that one injury could be the difference between life and death, or profitability and taking a loss. So remember to make sure to slow down and make safety a priority.

This article also appeared in the July 2018 issue of the Ortonville Independent.

Alex Fife is a fourth year medical student at the University of North Dakota's School of Medicine and Health Sciences. As a participant in the Center for Rural Health's Targeted Rural Health Education (TRHE) project, Fife has written this column because of his interest in bringing medical information to Ortonville area citizens. The information is not for diagnosis or treatment, and should not be used in place of previous medical advice provided by a licensed practitioner.